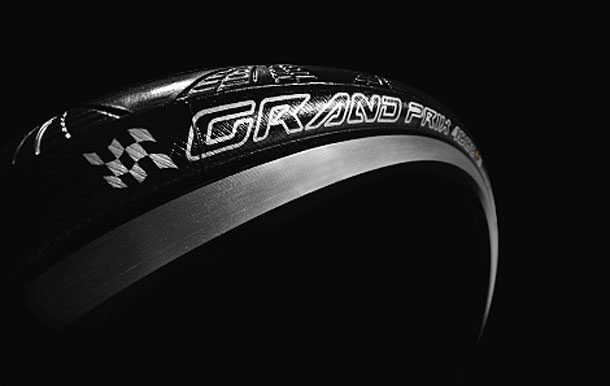 I have tried many different brands and models of tires over the long period of time that I have been riding my bike, and I have come to the conclusion that the Continental Grand Prix 4000 S road tire is the best.  I have ridden on many Continental tires, and came about this model over a year ago, and haven’t used anything else since.

What makes this tire so great?  There are several reasons why I will not race on anything else.  The Continental Grand Prix 4000 S uses the Black Chili rubber compound which provides 26 % less rolling resistance,  30 % better traction and 5 % more wear. The Continental Grand Prix 4000 S also uses a tough Vectran material, which makes it light and is less prone to developing cuts on debris and rough roads.  Since riding on these tires, I have only had three flats in the past year and a half.  When I was riding on a smaller budget, I put over 4,000 miles on a set of these tires for training and only had two flats the entire time.

This tire also uses an activated silica compound (the material used to reinforce the rubber), which helps the bicycle to corner faster and reduces the rolling resistance.  When racing criteriums at the Pro 1/2 level, we are going around tight corners and upwards of 30 miles per hour.  At these speeds, you are really testing the handling threshold of the tires.  For a clincher, I have not found a tire that has helped my bike to handle drastically better than the Continental Grand Prix 4000 S.  I have rolled a few tires racing criteriums. However,  because of the improved dry adhesion material on this tire, I have not had problems with rolling the Continental Grand Prix 4000 S  off the rim.  Normally, a lot of tires that are very stable like this are hard to put on, however the Continental Grand Prix 4000 S  offers the same stability, and is very easy to work with when changing a flat or putting on a new tire.

Last, but not least, unlike many other tires where it is hard to tell when the tread is gone, this tire has a good wear indicator system.  Since I am always testing the limits of my tires (how many miles I can put on them, etc.)  it is nice to know that I am not replacing them prematurely, or that I am risking my life.  On the Continental Grand Prix 4000 S tire, the wear indicators are small holes placed all over the tire. When those holes are gone, your tread is gone.

Overall, the  Continental Grand Prix 4000 S  is a great tire.  The cost is a little pricey at $74.99, but it is well worth the money for the amount of miles you will be able to put on them.  Being a member of the SoCalCycling.com Team, we have had much success with this tire, with some great results over the season.  Whether you are racing your bike, or just riding recreationally, I believe that you will not be disappointed with this tire.

The Continental Grand Prix 4000 S tire can be found at Incycle and other Continental dealers.