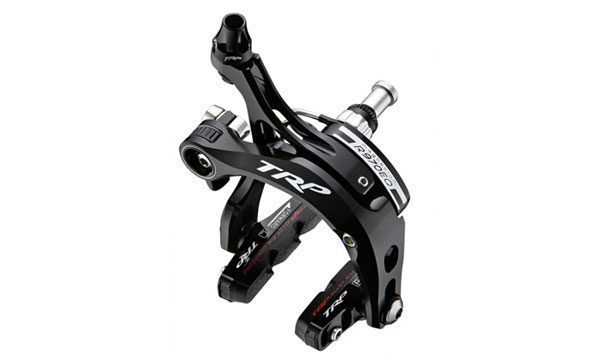 How do you make one of the best after market brake calipers better than they already are? You add an additional brake release that ratchets, which allows the brakes to be to be more efficient.

This is a great feature, if you swap out your wheels often. The brake release also lets riders make a micro adjustments when getting a wheel change during a race, in case you get a rim that is slightly wider than what is normally run.

The TRP 970 EQs are made from machined magnesium and weigh in at just 114 grams each. The hardware is made from titanium with CNC machined aluminum brake pad holders. The brake pads come in an aluminum and carbon compound.

The magnesium material of the TRP 970 EQs makes the brake arms super stiff. In addition, the brakes feel very solid when slowing down and need to stop on a dime.

From a cosmetic standpoint, the TRP 970 EQs look sleek and come in an anodized black and powder coated white.

The Verdict:  When it comes to the weight of the brakes, you might be able to find something slightly lighter, but won’t have the same stopping power. By TRP adding the quick release to the TRP 970 EQ, the brakes have become more versatile allowing riders to swap wheels quicker and allow for better adjustment on the fly. When it comes to doing the job, which is slowing you down and stopping you when you need to, the TRP 970 EQs are up to the task.