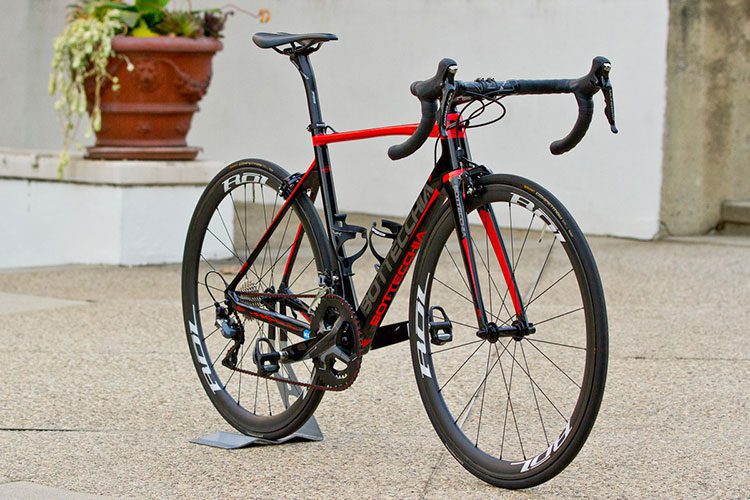 Pasta, Cars, Clothing and of course bikes! Italians know how to make bikes.   With Bottecchia being in the business since the 1920’s, they have plenty of experience making bikes, that have included major wins in the Giro di Italia in Italy, the Tour de France and in the United States.

This year the SoCalCycling.com Team had the opportunity to ride the Bottecchia 8AVIO Revolution for the 2019 season. The Team achieved some great results in road races and criteriums landing impressive wins in the hilly SLR Road Race and fast and technical La Grange Gran Prix at the Porsche Experience Center test track.

A Closer Look at the Bottecchia 8AVIO Revolution

Some key features of the Bottecchia 8AVIO Revolution are that the down tube is oversized to increase the stiffness of the ride to accommodate the large BB 386 bottom bracket shell. The headset uses a 1 1/2 bottom bearing and a 1 1/8 on the top bearing to make for a more responsive and confident handling bike. The fork is semi-aero and is straight-bladed, which allows for stable and aero front end of the bike.

The one thing I can say is that the Bottecchia 8AVIO Revolution is very light and comfortable. The SoCalCycling.com Team is using FSA components with a Shimano drive train and shifters.

Having the frame and fork being full carbon allows for a comfortable ride, but also allows for multiple tube shapes that can benefit the frame in certain key areas.

For example, the massive bottom bracket and down tube make for a responsive ride when you to stand out of the saddle. The rear of the bike uses a slightly smaller rear triangle, which you are seeing on a lot of the newer carbon bikes.

Bottecchia uses flattened rear seat stays to allow for comfort and yet retains it’s stiffness laterally. I believe what they have accomplished by having lowered seat stays and a flared out lowered seat tube allows for the frame to be more compliant, as it lets the seat tube slightly flex a little to take a little more edge off on the rough pavement without losing the responsiveness in the frame.

The paint scheme is pretty cool, as well and comes in three different color schemes including c81 Red and Black, Rc64 Light Blue and Black and c93 Green and Black.

The Bottecchia 8AVIO Revolution is one of those bikes that is ahead of its time as it’s already been out for more than a year now and some manufacturers are just now releasing their bikes with similar technology.

When riding the Bottecchia 8AVIO Revolution, you can easily spend several hours in the saddle due to its comfort level and efficiency without feeling beat up.

The Bottecchia 8AVIO Revolution handles well on all fronts. It sprints well, descend’s well and it climbs really well. For some reason, I want to go climbing on short or long hills on the Bottecchia 8AVIO Revolution. I think it is because of the low weight (frame is 1,120 grams) and how it feels when climbing in the saddle and it just feels nimble.