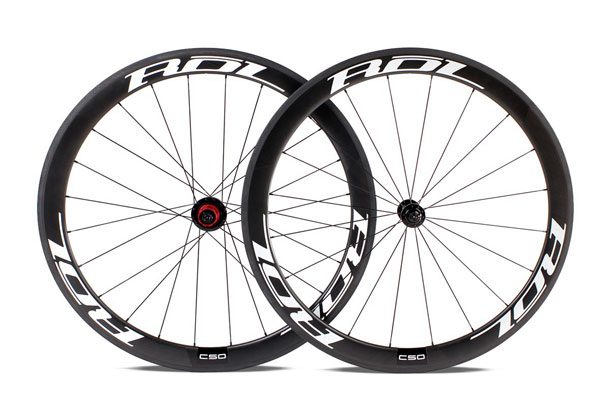 ROL’s C50 Carbon Tubular wheels perform in any condition with the agility and stiffness comparable to any other high-end carbon tubular wheelset. From laying down serious watts to railing a hard corner, these wheels do it all. The depth allows for aerodynamic efficiency while not carrying too much extra weight. As a great all-rounder, these wheels can be used in mountainous terrain to climb and descend. Another aspect to the C50 is that they hold up to extreme stresses such as road debris and dips. ROL came up with an amazing ratio to combine it all in this wheelset.

Turning on these bad boys gives one the confidence to carry the speed through any gnarly corner. The depth of the carbon provides an amazing ratio of stiffness to weight providing stability in situations where other wheels would break or fail. Having the ability to withstand great stress and also still be quick to a bike throw says a lot. The C50 wheels do just as good in a corner for a rider then most of the wheels one would spend top dollar for. The roll to these ROL’s is great for the risk taking sprinter, as well as the strongman.

Due to the medium depth of the C50, one could use it in many variable conditions. Whether those conditions are windy, wet, dry, or rough-surface; ROL created a wheel to handle them all. In high winds these wheels don’t budge as they provide a stable ride in its aerodynamic design. The rain on these wheels does not effect its ability to stop as drastically as one would have to on other wheelsets. When the road gets choppy or isn’t a road at all these wheels do not falter in any sense. Keeping a trueness after any brutal post winter road assault the wheels are un-phased.

One feels completely in control when these wheels are thrown side to side in a mad dash for the line. From smooth rolling hubs to strong aero spokes and the sturdy carbon rim; any power from the drivetrain is sent directly to the ground. Flex from extreme bouts of power doesn’t exist as the C50’s hold up in the most significant part of any race. Any peloton rider would feel the need to bridge a gap to the breakaway on these- they simply roll right through any field. Due to the amazing ratio of depth to weight these wheels feel effortlessly light while at the same time extremely sturdy.

Doing a climb with the ROL’s is no more strenuous then a shallow dish light aluminum training wheelset, the advantage being the that the C50 will then go on to smash the descent. Any hard efforts are rewarded as these wheels give no resistance in the struggle to get to the top. They hold up great to steep sections where lots of flailing or traversing maybe needed, as well as deep buried moments of self loathe as one nears the top to any climb they had to race over. After cresting the top of the mountain a wave of relief will be felt because ROL’s wheels descend extremely well. Picking up speed on these wheels is what it’s about- woah do they fly as you hit any downward grade! For an up and down kind of race course these wheels will do the trick with ease.

Rolling the flats seems effortless sometimes because of how efficient the C50 rotates. The weight ratio is superb to getting away and staying away in breaks or even brave solo attacks. Don’t be afraid to do work with these wheels; the effort will pay off as the momentum carries through each pedal stroke. Even when doing rolling hills, a C50 equipped racer will feel the advantage over other wheelsets in the same situation. ROL created a flat capable wheel with the truest strength being presented on the rolling hills.

In conclusion, the ROL C50 wheelset has so many hands in so many cookie jars that one would have to consider as a next purchase. From the sheer bravery felt in corners to the power driven to the ground in a sprint, these wheels throw down. In any weather the C50 never lets up and as for the road surface, it’s perfectly capable of withstanding a beating. Take this wheelset up a hill and it won’t let you down- it will send you flying down. ROL made a wheel that makes racing less stressful as one can rely that it will bring the rider confidence as they use its momentum in the rollers and its aero efficiency in the flats. All said, ROL’s C50 brings a gun to a knife fight.