Race Report: On the Podium at the Manhattan Beach Grand Prix – By Garrett Olsen, SoCalCycling.com Team 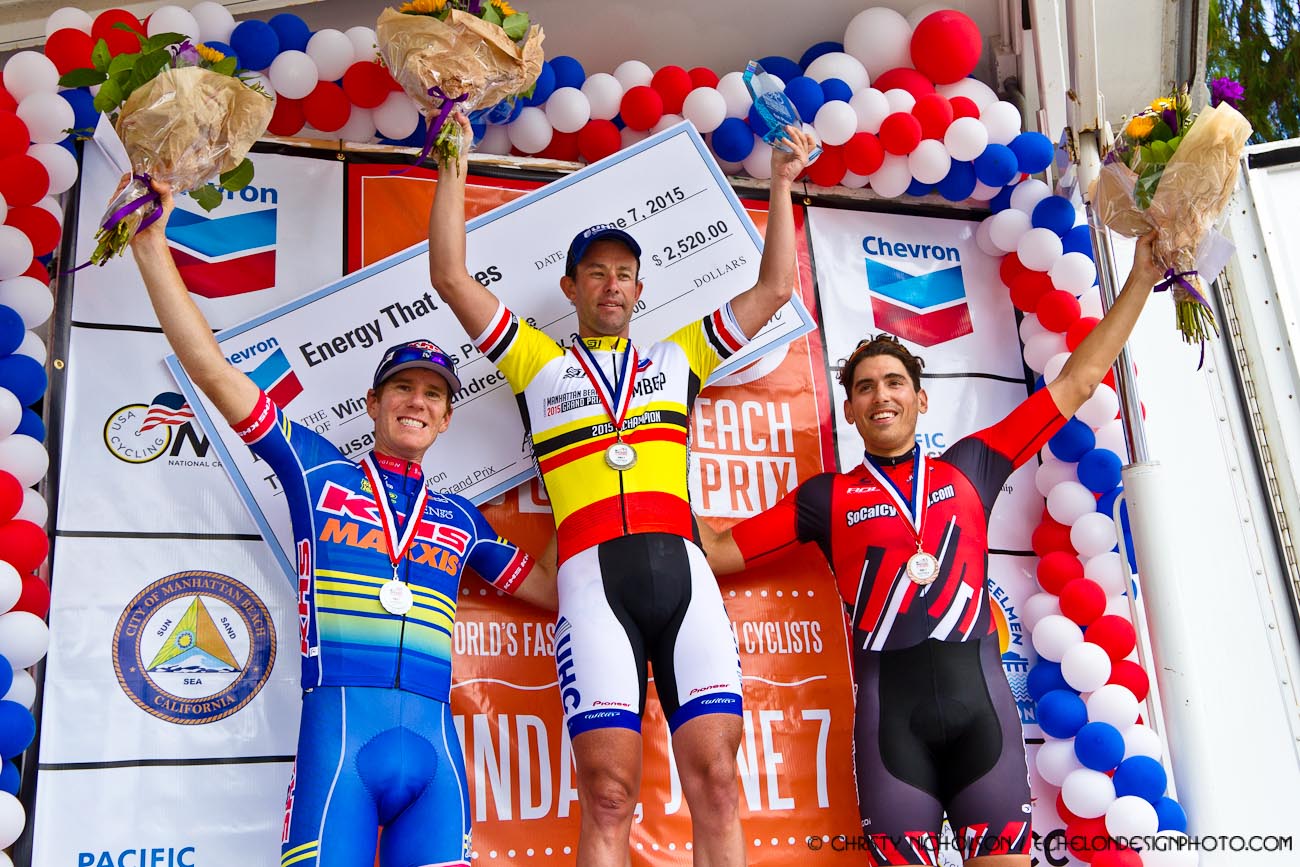 Manhattan Beach Grand Prix holds a special place in my heart.  It is very close to the center of the known universe, aka the Manhattan Beach Pier, and only a half an hour ride from my humble abode in Santa Monica, CA. The weather was perfect for a bike race.

The race started with numerous attacks going from the start with many of them being chased down as the field was motivated and fresh. With the speeds being so high on this course and averaging roughly 30+ mph, it would most likely be a field sprint with KHS-Maxxis-JL Velo, Astellas, Champion System / Stans No Tubes  and United Healthcare teams working for their designated sprinters. My SoCalCycling.com teammates Quinten Kirby, Josh Ruiz, Wesley Eslick and David Robertson were designated to work the early part of the race in order to be sure we were vigilant at the front of the race and we did not miss any moves.

After being at the front of the field, numerous teams were launching breakaway attempts up the road. Quinten put in a solid dig to bridge to a move, which was chased down.  I countered to bridge to a break that included David Santos (KHS-Maxxis-JL Velo), Rene Corolla (IRT Racing) and Hilton Clarke (United Healthcare).

With my SoCalCycling.com teammates in the field and my Team Director Frank Sarate calling out the time splits of the break to the field, it was time to commit as the peloton began to make bridge attempts to get up to our 15 second gap. Our group of four began to split up the workload of keeping the pace high in order to not only maintain but increase our gap.

Over the next 30 minutes, we were able to get to 50 seconds and survive some aggressive chasing from Astellas.  But, ultimately the truce from the breakaway of working together broke down with two laps to go with David Santos (KHS-Maxxis-JL Velo), Hilton Clarke (United Healthcare), and Rene Corolla (IRT Racing) all launching numerous digs until finally on the last hill Hilton Clarke made the final attack and followed it through all the way to the finish line for the win, with Santos in 2nd, myself in 3rd and Corolla in 4th.

My SoCalCycling.com teammates did an excellent job to chase down any bridge attempts and ultimately it made all the difference.

To make it on the podium of such a prestigious Professional National Calendar Criterium, I could not have done it without the support of my SoCalCycling.com Team Director and SoCalCycling.com teammates and all of our great sponsors who give us the best nutritional and technologically advanced equipment.