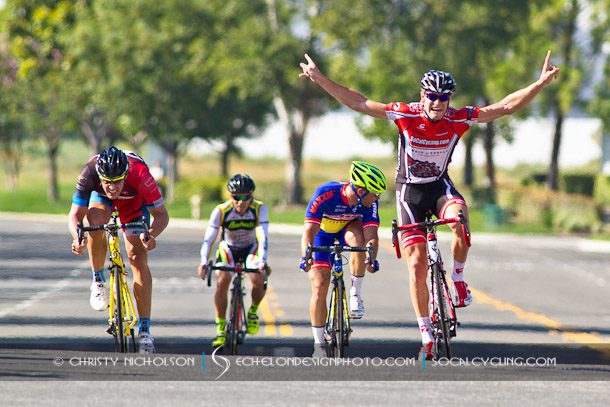 From the whistle it was going to be a hot, long, hard day in the Pro 1/2/3 race. With some of the nations fastest sprinters amongst the peloton and group of strong guys, this Ontario would have to be fought hard. 75 minutes in the pain cave isn’t how most would ideally spend their Sunday, but that’s what we love to do. So we did- attack after attack- the race was off to a fast fun start.

In the race two weeks before, the break was gone by lap 2 and I was hoping that wouldn’t happen this time around. Quickly finding myself at the front with some talented guys, I was watching little groups getting away then being reeled back in. An impressive move early on by Jelly Belly’s Sean Mazich left the field scrambling to catch him after he gained a pretty comfortable gap. This move started the solo efforts of other riders who would be reeled back in each time. Noticing the constant attacks by KHS and Serious Cycling I was going to bridge to one of their moves.

Thirty minutes into the race KHS’s Shawn D’Aurelio went solo and no one wanted to chase. After a lap or so I found myself within a few bike lengths of Shawn and noticed Bahati Foundation rider Steven Salazar with me, so I flicked my elbow and had him finish the bridge. The 3 became 4 with Serious Cycling’s Shawn Wayland. Soon a gap was apparent and the risk of Sean Mazich or the double trouble KHS usually brings to a break with Brian McCulloch available. Another threat were the sprinters Rahsaan Bahati, Justin Williams, and Cory Williams all throwing in moves to make the break.

Our break of 4 had a steady pace going but with 3 of us working consistently. A gap of 20-25 seconds gave us room to work through the heat beating down on us. I noticed our strength was keeping together; the Shawn’s did too, and so no one was going to be attacking. After minor mix-ups and communications, we became a unit trying to secure podium spots for our teams.

When the 5 lap card appeared I noticed a group of guys hovering behind us. For the next 5 laps we stayed tight using each others strengths to cover areas of the course best suited to keep that cushion of time. In these final laps, Sean Mazich appeared to be charging to catch us separate from his chase group. Our group held steady until 1 to go.

Shawn D’Aurelio made the first attack with a half lap to go. I had just pulled in the wind, so I was not willing nor had much to give in bringing him back. Between corners 4 and 5 Shawn Wayland took charge with Steven Salazar tucked in right behind. I lost contact for a couple of seconds and held tight trying to recover while getting ready for the chicane of corners 6-7. Shawn D’Aurelio held a 4-5 bike-length gap at this point. Finally catching my breath, I geared down and shot left very hard and quickly lost contact with the two. After shifting into a harder gear I put my head down and cranked it until I noticed it was just me.

I went full throttle for my friend/teammate Ronnie Toth who is recovering from a traumatic cycling crash that occurred last Sunday during the Manhattan Beach Grand Prix. Crossing the line first for him felt amazing. I also want to give my sympathy to those who knew Mike Herdman and have felt his loss. Shawn D’Aurelio was a good close friend of Mike’s and raced very hard driving the break to a great day.