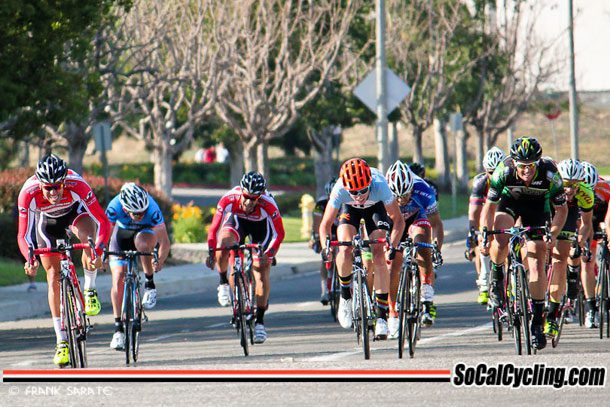 Sunday, April 20th, 2014 was the Easter Sunday Grand Prix held on the seven-turn course in Ontario, California. This race is part of a six race series. Races are held about once a month throughout the season. To win the series racers can obtain points from placing in the top seven in the finish as well as a mid race three-point prime.

With a few of the top local sprinters out of town, the race presented itself as a great opportunity for our SoCalCycling.com / Craig Shelly Team to gain another victory. Seventy-five riders started the race, four of which were SoCalCycling.com riders. Without any dominate teams with big numbers in the race to organize a chase, it seemed like a break could have a good chance of winning the race. Knowing this, three of our riders; Luke Ollett, Tyler Locke and Mathew Merrington did a great job of making sure we were in every single early move, while I covered anyone trying to bridge across and rested for a potential sprint. For the first half hour, the race was a bit disorganized with constant reshuffling of a handful of guys off the front but nothing really sticking. At the midway point in the race I found myself mid pack as they rang the bell for the points prime for the overall series. Only a few points behind in the series, I wanted to go for the prime assuming it wouldn’t expend too much energy. In the next few straights I moved up along the gutter and got to about 10th wheel, when KHS rider Brian McCulloch attacked, I followed and found myself off the front with four other riders. I then sprinted for the prime, which caused the break to get caught shortly after.

A few laps later, the break of the day went up the road, which included my teammate Luke Ollett. A lap or two later, my teammate Tyler Locke, bridged up to the break with two other riders in tow, followed by Mathew Merrington bridging up, bringing the break up to a strong 10-12 rider group. The gap started to grow and looked like the field was ready to concede for the day. I was happy with our chances having three of our strong riders in the move, so I just sat in field staying near the front, playing the waiting game. It seemed like there were only two guys left in the field who wanted to chase; Serious Cycling’s, Shawn Wayland and a South Bay Wheelman rider; Ronnie Toth. After a few laps they got organized and realized that nobody else was going to help them. I have to give them a lot of credit because they took control and brought that break back. Usually in local races everyone just gives up once the break has a big enough gap, so hat’s off to them for sticking with it. To my surprise, with three or four laps to go, the break was caught. Now, everyone was thinking field sprint, aside from the defiant Matthew Merrington who attacked up the left hand side and stayed off the front solo to nearly win, only to be caught with two turns to go. My Teammate Luke and I were working together to stay up front. We had perfect position staying in the top ten for the last few laps. Going into the last turn I was sitting sixth wheel and I had some momentum so I used it to move up the inside and get back up to Luke’s wheel who was sitting 2nd wheel. As I was coming up to him, I yelled to him, “GO!” He took me just past the turn setting me up perfectly for the win with Zane Torre of POC Ritte and Edwin Clement of SDBC finishing in 2nd and 3rd respectively, while Luke Ollett was able to hold on for 11th place.