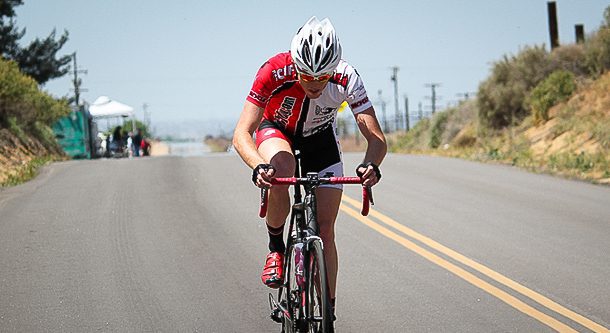 Race reports written by winners are familiar to many of you. They typically fall into two categories: the impossibly trite and the impossibly epic. The first goes something like this: “I knew it was going to be a big day on the bike so I ate both leaves of lettuce for breakfast. Then we rolled out and hit the first climb. Pretty soon I realized everyone else was already at threshold, so I ripped their legs off, and clobbered them over the head with their own legs for a while. I won by a country mile thanks to my great sponsors, loving spouse, and obedient children. It’s so satisfying to see that hard work does pay off!” The second type of winner’s race report goes like this: “First, there was a nuclear bomb, then my spokes broke, then I died, and after I died I bonked. There were fifty-seven Monster Media riders attacking, my intestines were coming out my ears, but I hung tough, pulled my panting tongue out of my broken spokes, and outsprinted Hulk Hogan at the line!”

This is not that type of race report. This is the race report from the gruppetto. Last week I was fortunate enough to win my hometown race, the Redlands Crit, as a Category 3 in front of my family and friends. Winning this race sealed the deal on my upgrade and so it was off to Bakersfield for my first Pro/1/2 road race, Vlees Huis Ronde. Obviously a Pro/1/2 road race was going to be different than a crit so I came in with modest expectations to put it mildly. I did remember to bring my trusty 11-28 climbing cassette, however. The cassette is nearly new with only about 25,000 miles on it—turns out that combining that cassette with a brand new chain wasn’t the best plan. This was about to make my modest expectations significantly more modest.

Forty-six starters rolled out under sunny skies with a steady breeze at our backs. Things were mellow along the valley with a few riders attacking to establish a break but nothing that sent any shockwaves back through the field. As we hit the climb, I shifted into the middle of my cassette and found that there weren’t really any gears that would work. My two options were spinning like a madman or grinding out of the saddle. It didn’t help that the pace started to pick up and before long people were popping off the back. My personal goal had been to stay with the front group for at least one full lap. Thanks to the incompetence of my mechanic (me) I was now just in survival mode. As we were approaching the freeway overpass Phil Gaimon started railing at the front and I was quickly off the back. Was I actually anywhere near the front to verify that it was Phil Gaimon who was railing it? No, of course not. “So how do you know,” you ask? The same way I know how NASA faked the moon landing—one part intuition, two parts hearsay, and three parts total bullshit. Besides it sounds way better if I say that I popped when Gaimon was railing it then if I say that I popped while Gaimon was nose breathing and discussing his favorite flavor of Clif Bar. As I was saying, Phil was killing it, I was out the back, and so were a lot of others. We continued to ride hard and by the first turn around had a nice, little septet working together. There was Andrew Bosco, another Bike Religion rider, a Get Crackin’ kid, several gentleman/scholars from Stage 17, and me. Kind of like the Magnificent Seven minus the magnificence. We settled in and began to chase.

Luckily, we had a soundtrack for our chase. You know that creaking, grinding sound that a sheet metal screw makes when it’s being drilled into your skull? You don’t? Well, just imagine it then. That was exactly the sound coming from the bottom bracket of one of the Stage 17 riders. The good news was that he had a slower than average cadence, maybe only 75 rpm. This 75rpm x 2 crankarms x 253 minutes of racing meant that we only had to listen to this sound 37,950 times.

As luck would or wouldn’t have it, I wasn’t the only one having mechanical issues. Phil did too. I can call him Phil because one time, way back before he had any idea who I was—which is exactly like now, except longer ago—he gave me a handful of kettle corn. Anyways, Phil was bridging across to the leaders, but apparently he flatted and didn’t have spare wheels in the truck or was raptured. Reports are still unclear at this time—either way, there was bridging and then there was no more bridging. After the second turnaround we saw Stefano still riding like a man possessed; we also saw Hunter Grove still riding a bicycle. They would not be getting back together.

As for our group, we picked up Pat Caro of Full Circle Cycling at the start/finish turnaround. He took off through the valley stringing us out single file, dodging bees at 32mph. A few of us would pull through, barely, before Pat continued riding like all Four Horsemen of the Apocalypse. He kept pulling like this until we hit the climb. Then poof, he disappeared. Has anyone seen him since? I think he may have turned around and ridden back to the cars. I’m still not sure what happened.

We continued to work together throughout the day, catching dropped riders one by one. Some of these riders were too spent and were subsequently dropped from our group. Others came to their senses and used us as a shuttle service back to the cars before abandoning. The miles continued to wear on our legs and the bees continued to plague us all day with Andrew Bosco taking the worst of it, catching a stinger right in the center of the forehead. Later, I did hear one wishful rider hoping for some strategic stinging/swelling in hopes of a little non-cycling performance enhancement. I can neither confirm nor deny whether his wish came true. I was too busy eating an endless stream of Clif products (insert shameless sponsor plug here) in hopes of not perishing on the side of the road in Bakersfield. Based on how badly our group wanted to get to the finish, I’m fairly certain my group would not have stopped if I had died on the side of the road.

Ultimately on our last trip up the big climb we caught up with Julio Mollinedo from Predator Cycling. I’m not sure what he was doing back with our group. He may have actually just ridden to the race from Delray Beach—either way he lent some much needed horsepower to our flagging group. Approaching the final climb to the finish more and more riders started skipping pulls as the pace picked up. Finally, Julio took a strong pull and gapped out one of the Stage 17 riders. I came around and the group was kind-enough/tired-enough/couldn’t-have-cared-less-enough to let me come across for twentieth place.

Stefano stayed away all day to take an impressive win, Anthony led the SoCalCycling.com Team with a thirteenth place finish, and I was content to have survived my first Pro/1/2 road race. Kristian will ride another day. It wasn’t exactly the day we were looking for as a team, but I can say that it was unquestionably one I’ll remember for a long time to come.