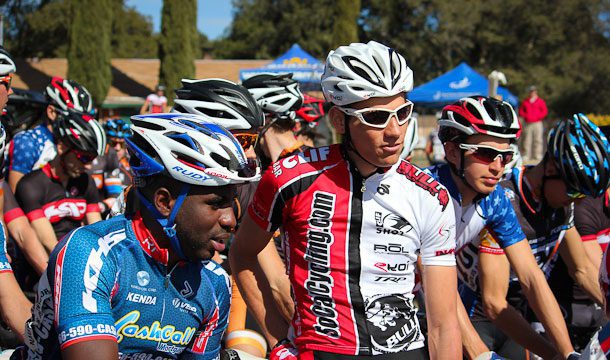 Beeeep! Beeeeep! Beeeeep! The sound of the alarm at 5:30 AM is never too exciting. Although, when it comes to racing I can’t complain. It was the last stage here at the Merco Cycling Classic. The course was 120 miles of mostly flat and some rolling hills. In my past experiences this course usually came down to a field sprint. A few riders would normally get away a lap or so in but be slowly reeled in by the long time defending overall champions Bissell Cycling Team.

As my SoCalCycling.com Team Manager Frank and I drove to the race we talked over my plans for the race. I was going to save my legs for the end and hope for a field sprint unless I saw a really dominant break away. I arrived to the race and wanted to get signed in. Luckily we have awesome sponsors like Champion System that have such comfortable gear, so I just kitted up before we left the house. The reason that was so valuable is because just shortly after signing in I had to take my bottles as quick as I could to my good friend Michael Roecklin of the Stage 17 Development Team and line up because we arrived there a tad later than we were hoping. Michael R. was kind enough to feed me in the caravan (team follow vehicles) today so it would be less stressful in the feed zone (designated spot on the course where riders obtain food and drinks during the race).

The race was underway and riders were anxious. Right away riders were attacking. The only problem was that every team wanted to be represented, so if one team missed out they would try and bridge across to the move but they would bring half the field along with them (also known as “welding”). Riders from the other teams that were represented and even myself were getting frustrated because it seemed that everyone was riding foolish. No teams like welding.

We were about half way through the race now when finally a move was established. The Bissell team had no hesitation and took over the front of the field. They lined up and were now chasing and slowly reeling in the riders. They kept the gap consistent and were just making sure they kept them within reach for the final lap. The next lap and a half the field rode steady without too many attacks to try and bridge across to the riders.

We were on to the final lap now and I was feeling great! I was really looking forward to trying to obtain a good result because I missed out on obtaining one in the opening stage due to the crash. A few inexperienced riders were already battling for wheels from about 20 miles out. I put myself in a great spot behind some riders I knew were going to wait for the closing miles to move up into position. We were about 8 km from the finish when I made my way to the front. We got into 4 km out and there was some real battling that started. Riders were trying to set there sprinters up and it was time for me to get on a train that I thought would get me where I wanted to be. With about 2km to go I got in a pickle with two teams battling for previous stage winner Ken Hanson’s wheel and decided to just go around them both. Upon this, there was a surge (hard acceleration ) from the field and I ended up in a decent position and was about 15 back from the front with 1km to go. We were now accelerating over the final hill and the sprint was about to open up. I was on Logan Loader’s (last years stage winners) wheel. We opened it up and I began sprinting when I noticed I was coming up fast on the lead riders. I tried going through a small gap on the left of the riders and it quickly was shut down and bunched up. So, I shot over to the right to get around and there was no room there either. I hit the brakes, threw a hand up in frustration that I could have came around but didn’t have room. I crossed the line in 7th and was still frustrated but glad I was safe and obtained a decent result. I normally would have made my way through the riders by giving a slight nudge with an elbow or so but was just looking to finish the race safely with a decent result.

I was very grateful for staying out of a crash that was in the closing kilometers and for the entire weekend of racing. Not to mention I got to stay with a host family of 2 Doctor’s of which one stitched up my wrist from the crash on the first stage.

We headed back to the home, showered up, gathered our belongings, had a awesome dinner with our hosts and got on our way back home to Southern California. It was a great weekend over all and I am looking forward to some upcoming races.