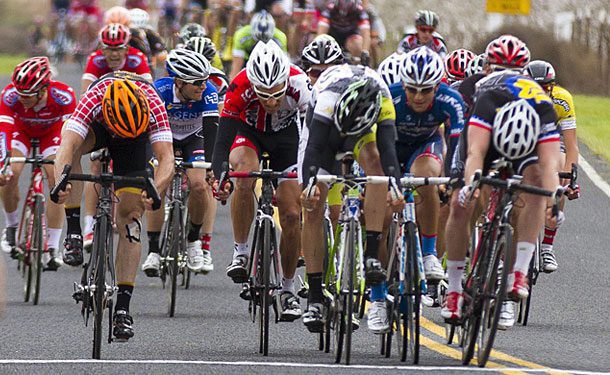 I was pretty excited to get underway at the 2013 Merco Credit Union Classic. Things were looking great prior to the start and the legs felt fresh. The host family we are staying with is incredible and the weather was perfect. My SoCalCycling.com Team Manager Frank Sarate was making sure everything went easy for me before the start of the race, bottles ready, wheels ready, he even helped pin on my number.

Well, we lined up and the race got underway. Immediately there were some anxious riders attacking. But my plans for the race were to just take it easy and hope for a sprint. In previous years Bissell has usually taken control and forced a sprint for their riders. Well, this year their tactics were a bit different. A hard acceleration was made up the first climb and a move of about 12 riders formed. I figured that a few teams would take control and bring it back but as I looked up I could see that most of the teams were represented.

A couple laps had now gone by and the gap went from 2.5 minutes to a minute and a half. I thought at this point we had a good chance that it would come back, especially because the breakaway group had now turned into 6 riders. We had about 3 remaining laps to go at this point and I was running low on water. We went through the feed zone and I slowed down to make sure I got a feed because I didn’t have a car in the caravan. Well, it was definitely a bad lap to drop back on because team CashCall and Optum pb Kelly Benefit Strategies decided to ramp it up a bit on the climb. I was a bit too far back and noticed that there was starting to become a large split just ahead of me. I went around some of the struggling riders and caught the tail end of the peloton just over the other side of the climb.

We rode the remainder of the lap steady and a few riders managed to catch back on. At this point our group wasn’t very large but was decent. I then knew that this would be the last of our selection. Or as some would call it the “main group”. We then received word that Phil Gaimon of the Bissell team was solo and his gap was over a minute and a half. I knew at this point that it was going to be a field sprint for 6th or 7th. I was a little unsure on how many were up the road. We got the bell lap and started up the climb. From what I could tell everyone had stayed together.

We got over the climb and I was now focused on a top 10 result. I knew my legs were great and that as long as I was near the front I could manage that. I got into position just behind the Optum pb Kelly Benefit Strategies train and settled in. I knew there would be some bumping and barging from some of the other teams because I was alone at the race and the other big teams were going to want my position. I battled for position from about 6km out. I knew if I could maintain position that when a big team took over and began to lead it out that no one would really have the strength to come up. Well with about 4km to go no one wanted to take control and the race fanned out. There were riders swarming and riders all over the place. We hit the 3km sign and I found myself in what I thought was a good spot when a couple of riders collided and went down. I was directly behind the riders and had no where to go. I ran into a rider on the floor and went down. When I popped up I saw that many riders had to stop or had crashed as well. I went to grab my bike to finish when I noticed a gash on my wrist and an official told me to wait for the medic. Being we were inside the 3km to go I was informed I would have the same finishing time as the group I was in. The officials took one look at my hand and my race was over for the day.